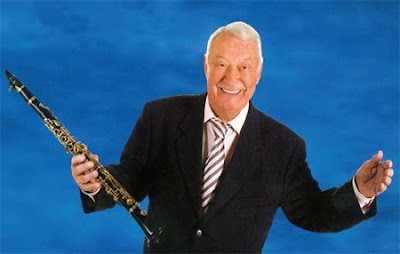 Hugo Strasser was born April 7th 1922 in Munich and became a famous German clarinetist and bandleader. The orchestra is known for its dance music, especially through the album series "Dance Record of the Year" and the musical sound and rhythm-settings in many dance championships. He formed his own 16-man dance band in the post WWII years and still today plays at many balls, including, inter alia, the Carnival balls, the Bayerischer Rundfunks. Many of his band members such as the late tenor saxophonist Werner Tauber, Hans Ehrlinger trombonist, trumpeter Etienne Cap and guitarist Dirk Schweppe were/are outstanding arrangers for their instruments. Although the orchestra has been around for all those years, there were few personnel changes.