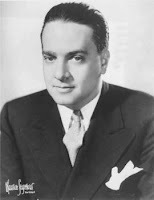 VINCENT LOPEZ While historians appear unsure of Vincent Lopez's birth year, probably 1895, it is certain that he was born on the 30th of December, in Brooklyn, NY, USA

Vincent Lopez died 20 September 1975 in Miami, Florida. He was an American bandleader and pianist. Lopez was born of Portuguese immigrant parents in Brooklyn, New York and was leading his own dance band in New York City by 1917. On November 27, 1921 his band began broadcasting on the new medium of entertainment radio; the band's weekly 90-minute show on Newark, NJ station WJZ boosted the popularity of both himself and of radio. He became one of America's most popular bandleaders, and would retain that status through the 1940s. He began his radio programs by announcing "Lopez speaking

!".His theme song was "Nola," Felix Arndt's novelty ragtime piece of 1915, and Lopez became so identified with it that he occasionally satirized it. (His 1939 movie short for Vitaphone, Vincent Lopez and his Orchestra, features the entire band singing "Down with Nola.") Lopez worked occasionally in feature films, notably The Big Broadcast (1932)

. He was also one of the very first bandleaders to work in Soundies movie musicals, in 1940. He made additional Soundies in 1944. Noted musicians who played in his band included Artie Shaw