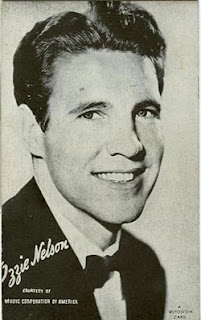 Oswald George "Ozzie" Nelson (March 20, 1906 – June 3, 1975) was an American entertainer and band leader who originated and starred in The Adventures of Ozzie and Harriet radio and television series with his wife and two sons. Ozzie started his entertainment career as a band leader. He formed and led the Ozzie Nelson Band, and had some initial limited success. He made his own "big break" in 1930. The New York Daily Mirror ran a poll of its readers to determine their favorite band. He knew that news vendors got credit from the newspaper for unsold copies by returning the front page and discarding the rest of the issue. Gathering hundreds of discarded newspapers, the band filled out ballots in their favor. They edged out Paul Whiteman and were pronounced the winners. From 1930 through the 1940s, Nelson's band recorded prolifically—first on Brunswick (1930–1933), then Vocalion (1933–1934), then back to Brunswick (1934–1936), Bluebird (1937–1941), Victor (1941) and finally back to Bluebird (1941-through the 1940s). Nelson's records were consistently popular and in 1934 Nelson enjoyed success with his hit song, "Over Somebody Else's Shoulder" which he introduced. Nelson was their primary vocalist and (from August 1932) featured in duets with his other star vocalist, Harriet Hilliard. Nelson's calm, easy vocal style was popular on records and radio and quite similar to son Rick's voice and Harriet's perky vocals added to the band's popularity.