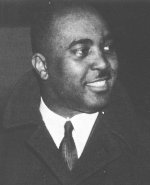 James Melvin "Jimmie" Lunceford (June 6, 1902 – July 12, 1947) was an American jazz alto saxophonist and bandleader in the swing era. Lunceford was born in Fulton, Mississippi. Little is known about his parents, though his father was a choirmaster in Warren, Ohio, before the family moved to Denver. He went to high school in Denver and studied music under Wilberforce J. Whiteman, father of Paul Whiteman, whose band was soon to acquire a national reputation. After high school he continued his studies at Fisk University. During 1922, Lunceford played alto saxophone in a local band led by George Morrison which included Andy Kirk, another musician destined for fame as a bandleader.