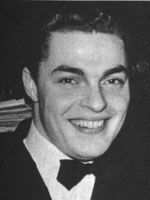 Bob Eberly (July 24, 1916, Mechanicville, New York — November 17, 1981, Glen Burnie, Maryland) was a big band vocalist, best-known for his association with Jimmy Dorsey and his duets with Helen O'Connell. Eberly was born Robert Eberle, but changed the spelling of his surname slightly to Eberly. His younger brother Ray was also a big-band singer, most notably with Glenn Miller's orchestra. Their father, John A. Eberle, was a policeman, sign-painter, and publican (tavern-keeper). Another brother, Al, was a Hoosick Falls, New York village trustee. He recorded the original version of "I'm Glad There Is You" in 1942 with Jimmy Dorsey and His Orchestra on Decca Records, 4197B. The song subsequently became a jazz and pop standard.