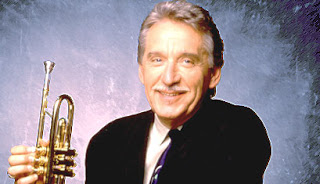 Carl Hilding "Doc" Severinsen (born July 7, 1927) is an American pop and jazz trumpeter. He is best known for leading the NBC Orchestra on The Tonight Show Starring Johnny Carson. Starting in 1952 during Steve Allen's tenure as host of NBC-TV's Tonight, Doc Severinsen played first trumpet in the band directed by Skitch Henderson. Severinsen took over as bandleader in 1967 and soon became noted for his flashy fashions. Under the direction of Severinsen, the The Tonight Show NBC Orchestra became the most visible big band in America. In addition to playing incidental music for sketch comedy, guest introductions, and intermission music during station breaks, Severinsen took the opportunity to update many well known swing and jazz standards for it, often introducing new listeners to classics by Cole Porter, Dizzy Gillespie, and others. Adept at comic interplay, Severinsen occasionally substituted for Ed McMahon as Allen successor Johnny Carson's announcer and sidekick. Still, he took his role as band leader on seriously.