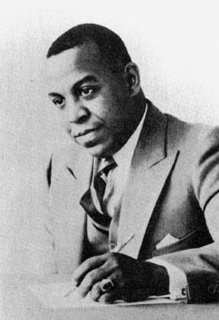 Donald Matthew Redman (July 29, 1900 – November 30, 1964) was an American jazz musician, arranger, bandleader and composer.
Redman was announced as a member of the West Virginia Music Hall of Fame on May 6, 2009.
Redman was born in Piedmont, West Virginia. His father was a music teacher, his mother was a singer. Don began playing the trumpet at the age of 3, joined his first band at 6 and by age 12 he was proficient on all wind instruments ranging from trumpet to oboe as well as piano. He studied at Storer's College in Harper's Ferry and at the Boston Conservatory, then joined Billy Page's Broadway Syncopaters in New York City. (He was the uncle of saxophonist Dewey Redman, and thus great-uncle of saxophonist Joshua Redman and trumpeter Carlos Redman.)