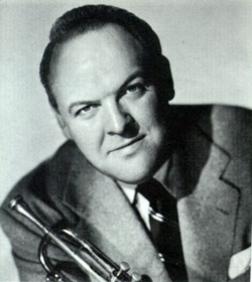 William E. "Billy" May (November 10, 1916 – January 22, 2004) was an American composer, arranger and trumpeter. He composed film and television music, for The Green Hornet (1966), Batman (with Batgirl theme, 1967),and Naked City (1960) and collaborated on films, such as Pennies from Heaven (1981), and orchestrated Cocoon, and Cocoon: The Return among others.
May also wrote arrangements for many top singers, including Frank Sinatra, Nat "King" Cole, Peggy Lee, Vic Damone, Bobby Darin, Johnny Mercer, Ella Fitzgerald, Jack Jones, Bing Crosby, Sandler and Young, Nancy Wilson, Rosemary Clooney and Ella Mae Morse.
As a trumpet player, during the 1940s big-band era, May recorded such songs as "Measure for Measure", "Long Tall Mama", and "Boom Shot", with Glenn Miller and His Orchestra,and "The Wrong Idea", "Lumby", and "Wings Over Manhattan" with Charlie Barnet and His Orchestra.With his own band, he had a hit single, "Charmaine" and released an album, Sorta-May.