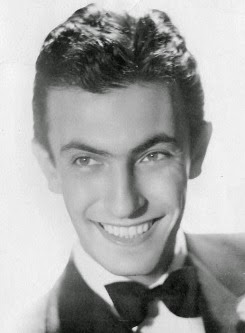 Edwin Frank "Eddy" Duchin (April 1, 1909 – February 9, 1951) was a popular American pianist and bandleader of the 1930s and 1940s, famous for his engaging onstage personality, his elegant piano style, and his fight against leukemia. WIKIPEDIA Edwin Frank Duchin was born in Cambridge, Massachusetts to Bessarabian Jewish immigrants, Tillie (née Baron) (1885–March 21, 1962) and Frank Duchin (June 2, 1885–?). He was originally a pharmacist before turning full-time to music and beginning his new career with Leo Reisman's orchestra at the Central Park Casino in New York, an elegant nightclub where he became hugely popular in his own right and eventually became the Reisman orchestra's leader by 1932. He became widely popular thanks to regular radio broadcasts that boosted his record sales, and he was one of the earliest pianists to lead a commercially successful large band.