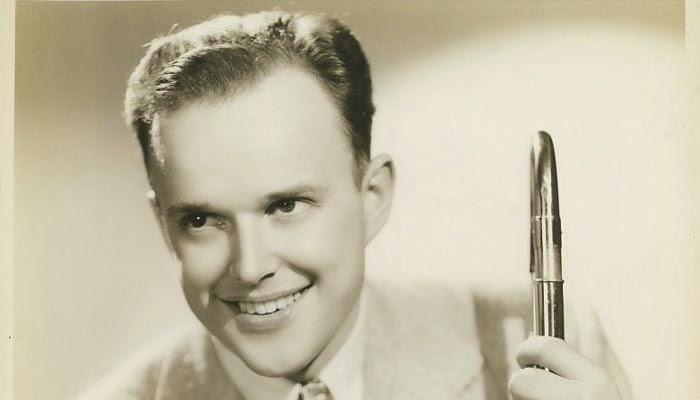 Wilbur Schwictenberg (July 12, 1912 – July 15, 1989) was an American trombonist and bandleader who also performed under the name Will Bradley. He was known for swing and sweet dance music, as well as boogie woogie songs, many of which were written by Don Raye. Born in Newton, New Jersey, Schwictenberg was one of the premier trombonists on the New York swing scene, and he often participated in jam sessions broadcast on The CBS Saturday Night Swing Club. In 1939 he and drummer Ray McKinley formed a big band, with Schwictenberg taking the professional name of Will Bradley. The Bradley band became well known for boogie-woogie, particularly its hit record, "Beat Me Daddy, Eight to the Bar" with Freddie Slack on piano. This record, along with another big-band boogie woogie number, "Scrub Me Mama with a Boogie Beat," and the original version of the classic, "Down the Road a Piece", were all three in the top 10 on the Billboard popular music charts at the same time, in late-1940. "Down the Road a Piece" was recorded with a pared-down trio called the "Will Bradley Trio," made up of McKinley, Doc Goldberg, and Freddie Slack, with guest vocals by songwriter Don Raye. Will Bradley was one of the first bandleaders who appeared in Soundies, three-minute musical films made for coin-operated "movie jukeboxes." Bradley's films, made in late 1940, were widely distributed and gave the Bradley band valuable exposure. Drummer Ray McKinley did most of the vocals. WIKIPEDIA In 1942 McKinley left to form his own band and a few months after joined the United States Air Force, where he played in the Glenn Miller Air Force band. Bradley tried to maintain his band, but problems caused by the war forced Bradley to disband. Bradley became a studio musician, and played for many years in the The Tonight Show Band during the Johnny Carson era.