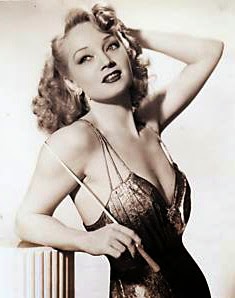 Ina Ray Hutton (March 13, 1916 – February 19, 1984) was an American female bandleader, vocalist and performer during the Big band era, and sister to June Hutton. Born Odessa Cowan to parents Marvel Svea Williams and Odie Daniel Cowan. WIKIPEDIA There have been theories that Ina Ray (Odessa) and her family were African-American, based on a Census record in their youth. According to actual documents, Odessa's father was Caucasian. His World War I Draft Registration cards list him as being "White." The 1920 & 1930 Census listed Odessa's grandmother Minnie as "Mulatto", her step-grandfather Bailey McFall as "Negro" and her mother, she and her younger sister as "Mulatto." At the time, according to history, anyone that was mixed with any sort of ethnicity besides Caucasian would have been considered "Mulatto", even Native-Americans. It was unlawful to be acknowledged or listed as a Native-American, thus in many Census records people of Native-American descent were actually listed as "Mulatto" and even sometimes as "Colored" or "Negro." It must also be mentioned that the term "Mulatto" derives from the Portuguese and Spanish words that meant "mule" or "hybrid." There were many Census records that listed anyone mixed of Hispanic, Asian, Native-American or African-American as "Mulatto."