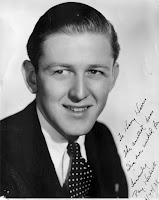 Here is a big band remote on NBC Radio aired April 18, 1945 from the Mural Room of the Hotel St. Francis in San Francisco. Ray Herbeck was born on 27 November 1910, Los Angeles, California, USA, and died om 17 January 1989, in Phoenix, Arizona. His orchestra was formed in Los Angeles, California in 1935. The Ray Herbeck Orchestra later moved to Chicago following the lucrative Midwest one-nighter circuit. With their theme song, ‘Romance’, Herbeck’s was one of the most commercially orientated orchestras of the day. Herbeck previously worked with Leighton Noble's band.