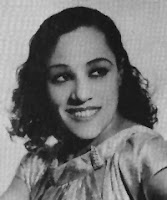 Blanche Calloway (February 9, 1904 - December 16, 1978) was a Jazz singer, bandleader, and composer from Baltimore, Maryland. She is not as well known as her younger brother Cab Calloway, but she may have been the first woman to lead an all male orchestra. Cab Calloway often credited her with being the reason he got into show business. She made her first recordings in 1925, with Louis Armstrong as a sideman on the session.
She recorded with a number of groups from the late 1920s through 1935, recording with Ruben Reeves and his River Boys in 1929 and fronting the Andy Kirk band briefly before forming Blanche Calloway and Her Joy Boys (with several members of that organization). In 1938 she disbanded the orchestra and worked as a solo act. In 1939 she converted to the Church of Christ, Scientist
From the 1950s through the 1970s, she worked as a disc jockey and later program director at WMBM in Florida.