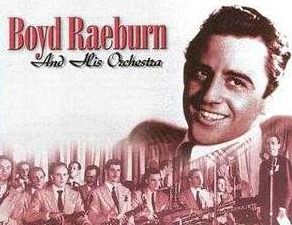 Raeburn’s bands kept failing and rebuilding throughout the 1940s. Between October 1945 and November 1946 he recorded his best discs (in terms of both performance and sound quality) for drummer Ben Pollack’s tiny Jewel label. These records, too, had little or no distribution. After one of his several bankruptcies the band was infused with cash thanks to a very generous donation from famed bandleader Duke Ellington, himself an avid fan of Raeburn. The Raeburn band made their last records, four sides featuring vocalist Ginny Powell (who had become Mrs. Raeburn in 1945), for Nesuhi Ertegun’s fledgling Atlantic label in August, 1947. Despite several attempts at trying to score pop hits for a mass market (“Milkman, Keep Those Bottles Quiet,” “Rip Van Winkle,” and “How High the Moon” with Powell among them), the Raeburn band consistently failed to find any mass marketing niche. It finally folded for good in the fall of 1949.