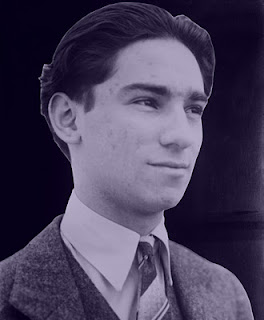 Roger Wolfe Kahn was an American jazz and popular musician, composer, and bandleader ("Roger Wolfe Kahn and His Orchestra"). Kahn (Wolff was his middle name's original spelling) was born in Morristown, New Jersey into a wealthy German Jewish banking family. His father was Otto Hermann Kahn, a famous banker and patron of the arts. Otto and Roger Kahn were the first father and son to appear separately on the cover of Time magazine: Otto in November 1925 and Roger in September 1927, aged 19. Kahn is said to have learned to play 18 musical instruments before starting to lead his own orchestra in 1923, aged only 16. In 1925, Kahn appeared in a short film made in Lee De Forest's Phonofilm sound-on-film process. Kahn hired famous jazz musicians of the day to play in his band, especially during recording sessions, for example Joe Venuti, Eddie Lang, Artie Shaw, Jack Teagarden, Red Nichols, and Gene Krupa.