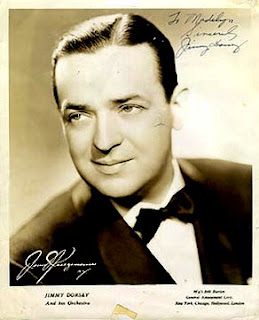 On February 29th 1904 bandleader Jimmy Dorsey was born in Shenandoah Pa. He fronted his own big band between periods when he teamed with more famous younger brother Tommy to lead The Dorsey Brothers Orch. Most of his 1940's hits featured Helen O'Connell & Bob Eberly on the vocals. The Dorsey Brothers starred in the "Stage Show" on TV which on four episodes in Jan & Feb 1956 introduced Elvis Presley to a national audience. Shortly before his death from lung cancer June 12 1957 at age 53 Jimmy Dorsey was awarded a gold record for his final hit "So Rare."