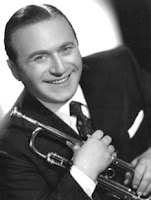 The details of Spivak's birth are unclear. Some sources place it in the Ukraine in 1907, and that his family emigrated to settle in New Haven, Connecticut while he was a child. Others place his birth in New Haven two years earlier, in 1905. What is certain is that he learned to play trumpet when he was ten years old, and played in his high school band, going on to work with local groups before joining Johnny Cavallaro's orchestra.
He played with Paul Specht's band for most of 1924 to 1930, then spent time with Ben Pollack (1931–1934), the Dorsey brothers (1934–1935), and Ray Noble (1935– 1936). He played on "Solo Hop" in 1935 by Glenn Miller and His Orchestra. He spent 1936 and 1937 mostly working as a studio musician with Gus Arnheim, Glenn Miller, Raymond Scott's radio orchestra, and others, followed by periods with Bob Crosby (1938), Tommy Dorsey (1938–1939), and Jack Teagarden (1939).