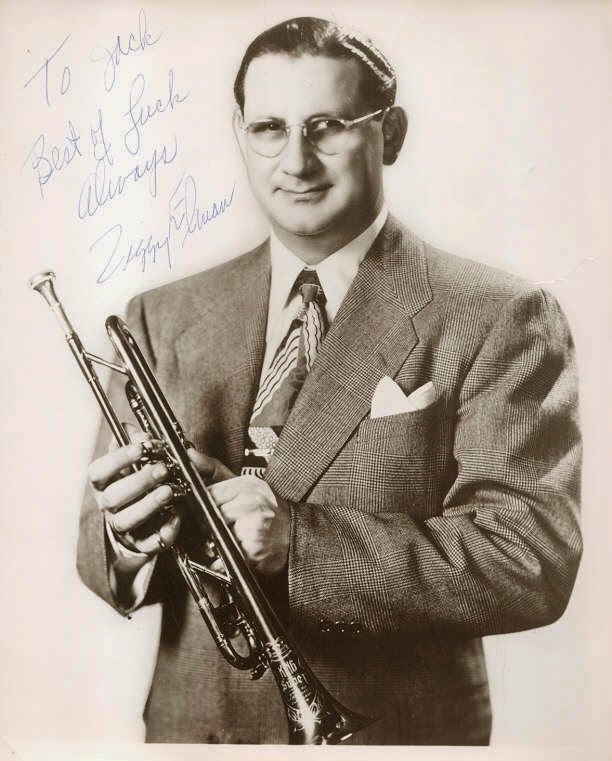 He was born in Philadelphia, Pennsylvania, but his family settled in Atlantic City when he was four. His father was a violinist who had hoped Harry would play violin as well. Although he did learn to play the violin, Harry preferred the brass instruments. He began playing for Jewish weddings and nightclubs at age 15, and in 1932 made his first recording where he played trombone. At some point in the decade he adopted the name Ziggy Elman. Elman is a shortening of Finkelman while "Ziggy" is believed to be a reference to Florenz Ziegfeld. In 1936 Elman joined the Benny Goodman orchestra as a trumpet player after playing briefly with Alex Bertha's local big band at Steel Pier in Atlantic City, where Goodman heard him and was impressed. His 1939 composition "And the Angels Sing," with lyrics by Johnny Mercer, (originally recorded in December 1938 by his own band as an instrumental, "Frailach In Swing") became the number one song in the nation. In 1956 he was asked to recreate his famous frailach solo along with the original vocalist Martha Tilton for the movie, The Benny Goodman Story, but was unable to, his technique having since withered away. Elman appeared performing it in the film, but another trumpeter, Manny Klein, played the solo on the soundtrack. This song is arguably his longest-lasting musical legacy, since it has appeared in films up to 1997 and was inducted into the Grammy Hall of Fame in 1987. After his work with Goodman, Elman joined Tommy Dorsey's band and also played as a member of the military during the war. He loved frailach music, later known as klezmer, and made a few recordings of such with Mickey Katz. In the period from 1940 to 1947 he was honored in Down Beat magazine's Readers Poll six times.He led his own bands from 1947.