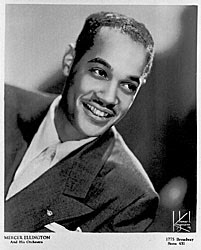 Mercer Ellington was born in Washington, DC, the son of the composer, pianist, and bandleader Duke Ellington and Edna Thompson. By the age of eighteen he had written his first piece to be recorded by his father ("Pigeons and Peppers"). WIKIPEDIA In 1939, 1946–1949, and 1959 he led his own bands, many of whose members went on to play with his father, or to achieve independent fame (notably Dizzy Gillespie, Kenny Dorham, Idrees Sulieman, Chico Hamilton, Charles Mingus, and Carmen McRae). During the 1940s in particular he wrote pieces that became standards, including "Things Ain't What They Used to Be", "Jumpin' Punkins", "Moon Mist", and "Blue Serge". He also wrote the lyrics to Hillis Walters' popular song, "Pass Me By" (1946), which was recorded by Lena Horne, Carmen McRae and Peggy Lee.