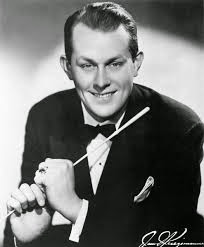 Monroe formed his first orchestra in Boston in 1940 and became its principal vocalist. He began recording for RCA Victor's low-priced Bluebird label. That same year, Monroe built The Meadows, a restaurant and nightclub on Route 9 in Framingham, Massachusetts, west of Boston. He hosted the Camel Caravan radio program from there starting in 1946, and during this time featured in a Camel commercial.[3] The Meadows burned to the ground in December 1980 after sitting shuttered and vacant for a number of years. WIKIPEDIA Monroe was tall and handsome which helped him as a band leader and singer, as well as in Hollywood. He was sometimes called "the Baritone with Muscles", "the Voice with Hair on its Chest", "Ol' Leather Tonsils", or "Leather Lungs".