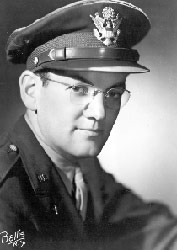 On December 15th in 1944, as World War II raged, news spread of the loss of an airplane somewhere over the English Channel between England and Paris. On board the ill-fated aircraft was Major Glenn Miller, who had been on his way to lead his Air Force Band in a Christmas concert. Alton Glenn Miller (March 1, 1904 – missing in action December 15, 1944) was an American jazz musician (trombone), arranger, composer, and bandleader in the swing era. He was one of the best-selling recording artists from 1939 to 1943, leading one of the best known "Big Bands". Miller's notable recordings include "In the Mood", "Moonlight Serenade", "Pennsylvania 6-5000", "Chattanooga Choo Choo", "A String of Pearls", "At Last", "(I've Got a Gal In) Kalamazoo", "American Patrol", "Tuxedo Junction", and "Little Brown Jug". While he was traveling to entertain U.S. troops in France during World War II, Glenn Miller disappeared in bad weather over the English Channel. The Glenn Miller Orchestra was reformed after the war and continues to record and perform to this day. Details of death/crash | Wikipedia | SHOP: Glenn Miller