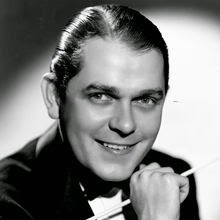 Masters formed a swing band after dropping out of Indiana University in the mid-20s. Frank had played the banjo and sang in a college band and had spent at least one summer playing his way back and forth to Shanghai, China aboard a cruise ship. In Chicago in 1925, he formed an orchestra and became the house act at the Sherman Hotel's College Inn in Chicago. He signed with Victor Records in 1927 and began his recording career but didn't achieve much success until he switched to Vocalion Records in 1939 and recorded what would become his theme song, "Scatterbrain," a number one hit that year. WIKIPEDIA MCA organized a sponsored radio show for the Masters band in about 1939. It was broadcast first via WBBM, later WMAQ and was called “It Can Be Done.” Also featured each week was poet-journalist Edgar Guest. The show, according to saxophonist Buddy Shaw, who played with Frankie’s band at the time, featured stories about people who had achieved success through adversity. Masters and company also made several movie shorts, which were shown in theaters nationally. Frankie and Phyllis Miles, his wife, hosted two television shows locally. The first, in 1950, was a weekly show sponsored by RCA Victor called “Lucky Letters” on WBKB. Later that year and into early 1951, they had a weekly program called “Walgreen’s Open House.” Then in the fall of 1974, when the famed Empire Room of the Palmer House reopened for the season, the Frankie Masters Orchestra became the new house band, replacing Ben Arden and his band, which had been appearing there since 1957.