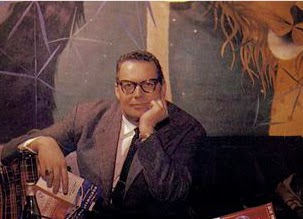 Harry Arnold (August 7, 1920, Helsingborg – February 11, 1971, Stockholm) was a Swedish jazz saxophonist and bandleader. WIKIPEDIA Arnold led his first big band in 1942, playing saxophone initially but eventually ceasing performance work primarily as an arranger. From 1949-52 he played and arranged for Thore Ehrling's band and worked extensively as a studio musician, particularly writing film scores through much of the 1950s. From 1956 to 1965 Arnold led the Swedish Radio Big Band, which included many of Sweden's best known jazz musicians of the era, such as Arne Domnérus, Bengt Hallberg, and Åke Persson. American trumpeter Benny Bailey played with the band for a time, and Quincy Jones arranged and briefly led the group; they recorded with Ernestine Anderson, Lucky Thompson, Coleman Hawkins, Toots Thielemans, Tony Scott, and Stan Getz. The group disbanded in 1965, after which Arnold continued work as an arranger and led big bands in Europe until his death in 1971,at the age of 51.