The Wrigley family's purchase ushered in a golden era for Catalina in the 1920s and 30s, when the Island came to be a sought-after tourist destination. The Wrigleys promoted the island through events such as the 1927 Wrigley Ocean Marathon swim, golf tournaments and hosting The Chicago Cubs for spring training. The casino was open nightly for dancing and many films of the era were filmed on the island, introducing the rich and famous to the island. In the 1930's and 40's, Big Band music was broadcast live from the Avalon Ballroom in the Casino to a nationwide audience. A long list of notable Big Bands entertained visitors in the Casino Ballroom over the years. Maurice Menge and his El Patio Orchestra had the honor of officially opening the building on May 29, 1929 and since that day Big Band sounds have echoed through the building. Many of the bands would play four to six week engagements at the Casino, filling the ballroom every night during the summer season. Visitors had the opportunity to dance to the impressive sounds of Jan Garber, Kay Kyser, Bob Crosby, Dick Jurgens, and Jimmy Grier, just to name a few.
Catalina has hosted such Hollywood luminaries as Charlie Chaplin, Mickey Rooney, Judy Garland, Clark Gable, Henry Fonda, James Cagney, Errol Flynn, Orson Wells and John Wayne. In 1924, a film company brought 14 bison to the Island to make a movie and left them behind. Today this famous herd remains and is maintained by the Catalina Island Conservancy. Presidents, politicians, artists, authors and many thousands of tourists visited Catalina during this storied era. 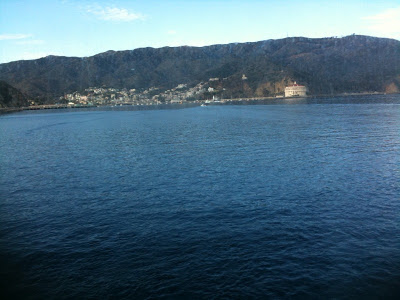