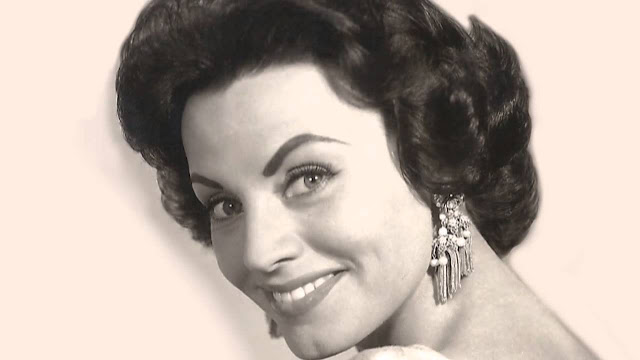 Katherine Laverne Starks (July 21, 1922 – November 3, 2016), known as Kay Starr, was an American pop and jazz singer who enjoyed considerable success in the 1940s and 1950s. At 15, she was chosen to sing with the Joe Venuti orchestra. Venuti had a contract to play in the Peabody Hotel in Memphis which called for his band to feature a girl singer, a performer he did not have at the time. Venuti's road manager heard Starr on the radio and recommended her to his boss although she was still in junior high school and her parents insisted on a midnight curfew. Though she had brief stints in 1939 with Bob Crosby and Glenn Miller (who hired her in July of that year when his regular singer, Marion Hutton, was sick), Starr spent most of the next few years with Venuti until he dissolved his band in 1942. It was, however, with Miller that she cut her first two recordings: "Baby Me" and "Love with a Capital You". They were not a great success, in part because the band played in a key that, while appropriate for Marion Hutton, did not suit Kay's vocal range. After finishing high school, she moved to Los Angeles and signed with Wingy Manone's band; then from 1943 to 1945 she sang with Charlie Barnet's ensemble, retiring for a year after contracting pneumonia and later developing nodes on her vocal cords as a result of fatigue and overwork. A singer ... is no more than an actor set to music. In 1946 Starr became a soloist, and in 1947 signed a contract with Capitol Records. She is best remembered for introducing two songs that became #1 hits in the 1950s, "Wheel of Fortune" and "The Rock And Roll Waltz". Starr was successful in every field of music she tried: jazz, pop and country. But her roots were in jazz; and Billie Holiday, considered by many the greatest jazz singer of all time, called Starr "the only white woman who could sing the blues." WIKIPEDIA